Although the tale of Robinson Crusoe is in many ways a tragic story, many of us have more than once imagined ourselves living the life of a castaway. Waking up to the ebullient swaying of palm trees and the gentle waves of a turquoise sea; living off the nature and existing far away from the feverish predilections of society; the attraction is eminent. However, such a picturesque vista is not necessarily translated into a pleasant life. 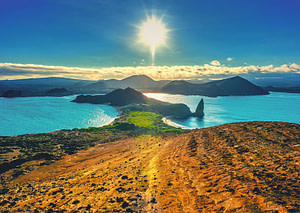 For all their aesthetic glory and primal enticement, the Galapagos Islands have, due to a simple factor, deprived of fresh water. As a result, despite the beauty of the isles, they have continuously exacted a primal harshness to those who sought their fortune in the celestial islands. Yet, one island saw it fit to appear as the sublime abode it had the potential to be. In San Cristóbal one can find the Galapagos’ only major source of fresh water and, hence, since the first discovery of the Galapagos, San Cristóbal has been a favourite.

As with a lot of things in Ecuador, San Cristóbal’s reservoir of fresh water is located inside a volcanic crater, although a dormant one. Due to this conical oasis, there has been a permanent settlement on the island for close to 200 years. In fact, when Charles Darwin sailed into the archipelago on the HMS Beagle, the first island he sat foot was San Cristóbal. Here he would be welcomed by Nicholas Lawson, the acting governor of the Galapagos Islands. Darwin would later mention Lawson because the governor had explained to him that he could tell which island a Galapagos Tortoise came from just by looking at their shells and their sizes. This proposition would, as testified by Darwin himself, contribute to Darwin’s focus on the endemism of the Galapagos species. 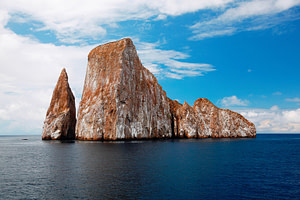 Although the access to fresh water is no longer determined by geographic conditions, San Cristóbal remains a popular island even today. The island is a good blend of everything the archipelago is famous for: tranquillity, wildlife, and the sublimity of nature. In the sleepy town of Puerto Baquerizo Moreno you might find it challenging to locate a vacant bench for you to sit down and rest your legs. This is not because there are none, but because they are favoured dwelling places for the island’s sea lions. Moreover, the island’s picturesque beaches are easily accessible, making both lounging in the sun and wildlife discovery easy. Furthermore, just outside the island itself you’ll find Kicker Rock, or Leon Dormido, a rock formation famed for its bustling underwater life, making it an optimal place for snorkelling.

Due to the island’s eclectic profile, San Cristóbal is a favourite among travellers more than 200 years after. So how about it, would you like to experience San Cristóbal and the Galapagos? Check out our tours here!